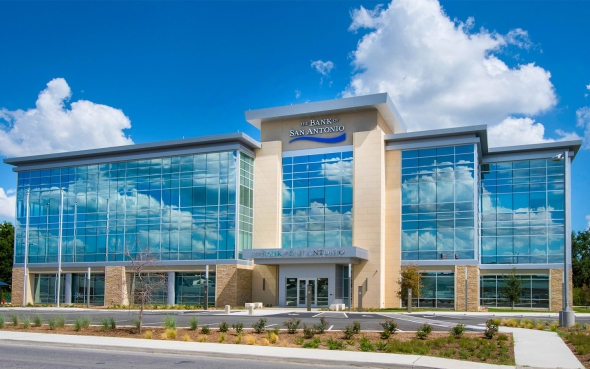 “These three bank holding companies have many common shareholders and are affiliated with each other,” Bugg said. “It just made strategic sense for them to combine into one Central Texas banking franchise which covers San Antonio and Austin, the second and third fastest-growing large American cities, respectively, and the Texas Hill Country which also has a strong and growing economic base.”

“It’s very humbling for me to remember how we started The Bank of San Antonio in 2007 with a small group of friends among San Antonio’s business and civic leaders who made up the Board of Directors and founding shareholders, with the goal of serving locally-owned businesses in San Antonio,” he said. “We began The Bank of San Antonio with $25 million in capital and assets, and it has grown remarkably to more than $1 billion in assets in just 13 years.

“Today, we announce that these three banks are merging with a combined proforma asset base of approximately $1.5 billion. The service promise for all three banks serving locally owned businesses has proven to be a successful strategy, and this merger will continue the culture and tradition of serving local businesses and communities throughout our new Central Texas banking franchise.”

Under the definitive merger agreement, Capitol of Texas Bancshares, Inc. and Texas Hill Country Bancshares, Inc. will merge with and into Southwest Bancshares, Inc. The banks will be merged into one bank charter, but each of the banks will maintain their existing names, executive management teams and board of directors to preserve their culture and continue to serve the needs of their respective communities.

“The combination of these three banks under a single bank holding company will create a Central Texas banking franchise to provide enhanced scale that will drive organic growth and increase profitability,” Bugg said.
The Bank of San Antonio has five banking centers in San Antonio, The Bank of Austin currently has one banking center in Austin and Texas Hill Country Bank has two banking centers in Kerrville, one in Bandera and one in Fredericksburg.

The Bank of San Antonio President and CEO Brent R. Given said, “In our 13-year history, The Bank of San Antonio as seen extraordinary growth as clients have embraced our business model – relationship-centric, concierge-quality service and targeted strategic solutions. The Bank of San Antonio’s broad depth of resources, together with our new partners’ strong local ownership, management and market intelligence, makes for a powerful combination that will enable us to continue to expand our Central Texas market share.”

Jon Eckert, President and CEO of The Bank of Austin, said, “The Bank of Austin was founded by a diverse group of Austin’s business leaders to be our city’s business bank. It’s been only three years since we opened the doors, but this bank has already had a strong impact on our community. This merger will give The Bank of Austin the ability to deliver a higher level of service, unparalleled in the Austin market.”

Texas Hill Country Bank President and CEO Roy Thompson said, “Becoming part of such a strong banking combination with our neighbors in San Antonio and Austin just brings more opportunities for our clients and easy access to more resources. Combining these three geographic elements of Central Texas into one, regionally-focused banking group just adds to our advantage.”