ANYTHING IS POSSIBLE: HOW HOPE ANDRADE BUILT HER SUCCESS

Esperanza “Hope” Andrade is a San Antonio businesswoman whose story of success attests to the truth of her core belief: if you set your mind to it, anything is possible. Andrade’s career as an entrepreneur began with a leap of faith, leaving her corporate job to start a small business. This move jumpstarted what would be a long, prosperous career in the world of entrepreneurship, where she would create numerous businesses and work high-profile jobs for the Texas government. She was the sixth and longest-serving Texas Secretary of State and the second of three women in the post under Perry. Andrade is the first Hispanic woman to have served as the Texas Secretary of State.
All of this became possible when she took the risk to leave her job and start a company of her own in her late 20s, and her success came because of two key ingredients: the selfless desire to provide more for her family and her community, as well as an unending belief in herself.
LISTEN TO THE FULL INTERVIEW
Hope Andrade got her start in the business working for IBM, where her ambition was recognized early on by the company, allowing her to quickly move up the ranks because of her thoughtful suggestions and relentless desire to grow. Her time at IBM gave her valuable insight into how a business should run, and after she decided the private sector was not for her, she took the lessons she learned from this job to guide her business ventures over the course of her long and accomplished career.
Hope’s drive for success has always been fueled by one word: family. “It's all been about family. Driving forward to help my family. So I knew that I wanted to better ourselves,” Hope says. Even at a young age, she was looking for opportunities to make money to provide for her family, and to her, this indicates that she’s always been an entrepreneur.
Although family has always been at the heart of her entrepreneurial journey, her success only happened because she had a strong belief in herself, which she had no choice but to have.
“I don't think that I ever doubted myself. I didn't have an option to do that. Everything that I had done to take the step, I had to make sure that I was going to be successful," Hope says, "I left corporate America, my husband and I, and we depended on that second income. It was a big step for us."
That first step was what began her life-long career, and she wouldn’t be who she was today if she hadn’t taken that initial leap of faith. It really changed her family dream, and although much of her success came from her ambition, she also acknowledges the important support offered to her by her hometown, San Antonio. She says,

The support San Antonio has given her over the years is something she deeply appreciates, so she continues to give back to the city she loves. Someone once told Hope she had paid her dues already to San Antonio, and she responded, “Oh, you ain’t seen nothing yet. I have so much more to give.”
What the community has provided Hope over the years has led her to want to leave a legacy in San Antonio. She wants to be a part of creating a city that can provide for her grandchildren and generations beyond. For her, it’s about building a community that continues to offer opportunities for future generations, and that’s what San Antonio, to her, needs to be.
For young Latinas in San Antonio, she is hopeful that more young women will follow in her footsteps, but it all starts with getting a proper education.
“When I look at future Latinas I'm very excited because I see a great future. I see our Latina population understand the importance of education and that's key. That's the number one,” she says.
Education is the foundation of being able to build a strong career, and an education is something that no one can take away from you. When young entrepreneurs ask Hope what should I do? she responds, "Go back to school. You've got an undergraduate, work on the next one and keep working because that's what sets us apart."
People like Hope Andrade are examples of the great possibilities inherent in the San Antonio community and people. With a desire for education, a strong work ethic, and an unending self-belief, there’s no telling what can happen. To everyone contributing to the future of San Antonio, take Hope’s advice and believe in yourself, then be ready. She says,
“Hold on. Because what you're going to be able to accomplish ... not even in your wildest dreams would you imagine it.”
Podcast 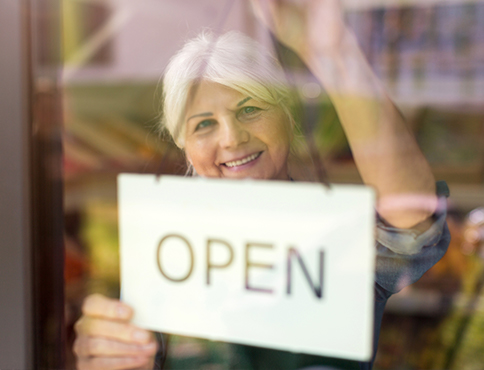 We magnify your business by maximizing your potential.

Your business is essential to our community’s value. We believe in your big idea and the big steps you’ve taken to put that idea in motion.
Explore Business Banking