A Tribute To James Gorman, Jr 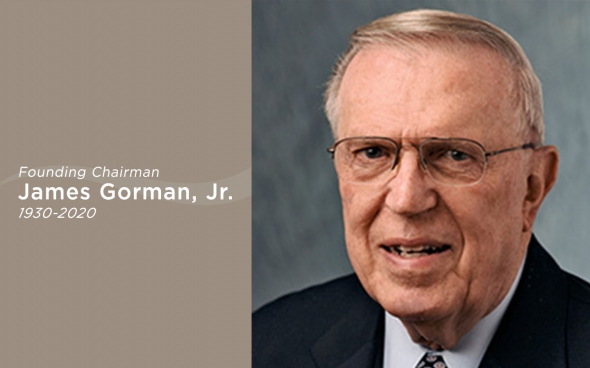 James Gorman, Jr., Founding Chairman of the Board for The Bank of San Antonio

As a banker, stock trader, venture capitalist, civic leader and philanthropist, James Gorman Jr. enjoyed enviable success. His true passion, however, lay elsewhere.
“In terms of his heart, he really loved helping young people, whether it was building the children’s museum or encouraging them as a mentor and (investment) angel,” said his son, Jim Gorman III.
“He not only gave good advice, he would invest in speculative deals if he had a belief in the individual.”
Gorman, 90, died Oct. 3 of heart failure, after a long illness.
Almost to the very end, he was participating in board meeting conference calls from his home.
“It was one of the things he was proudest of, still going to work every day,” his son recalled.
Several of his contemporaries said Gorman left an unblemished legacy of good deeds and service.
“He was one of the most considerate and compassionate persons I’ve ever known. If there was ever a human who never had a disparaging word spoken about him, it was Jim,” said Joe Straus Jr., 93.
Bob Nelson, 75, who knew and worked with Gorman for five decades, described him as a “bigger than life figure,” a “Jimmy Stewart, John Wayne-type of human being.”
“There’s not a soul who didn’t walk away a better person for having him in their life. And it was just who he was,” he said.
Born in Wichita Falls, Gorman earned a geology degree from the University of Oklahoma in 1952 and married his sweetheart Tena that year. Together they would raise three children.
After serving in the Air Force in Korea, he went to work for his father’s oil business in San Antonio. When the oil patch busted in the early 1960s, he went to New York to get a securities license and began a new career.
Over the next six decades in San Antonio, as Gorman prospered, he also became a pillar of the business and civic communities.
He started new banks and served in a broad range of leadership roles on corporate boards, task forces, commissions and social organizations including Fiesta San Antonio, the Order of the Alamo and the Texas Cavaliers, for whom he served as commander in 1972.
His special interests, often funded by Gorman family foundation grants, were children’s health care, medicine, scientific research and public television.
In particular, he and Tena supported the Christus Santa Rosa Children’s Hospital, the Southwest Foundation for Biomedical Research, the Cancer Therapy and Research Center and KLRN.
“He and Tena endowed a chair at Santa Rosa in pediatric cardiac surgery,” said Mickey Schott, a longtime friend and partner. “They were really committed to helping organizations that made a difference in the community, especially in medical research and children’s issues.”
A church-goer and man of faith, Gorman followed a personal credo of honesty, hard work and helping others.
“The primary thing was giving back, of being grateful for all your blessings, and sharing them with the community and your fellow man,” said his son.
“He was also inspirational. Young people would gravitate toward him. He wanted them to have what they needed to pursue their big plans and succeed.”
Gorman also had a knack for connecting with people of different backgrounds and political beliefs, and working with them toward common goals.
“He was an across-the-aisle kind of guy. He could get things done. He had friends on both sides of the political spectrum, from attorneys to businessmen, and everything in between,” his son said.
A lifelong outdoorsman, Gorman also was an avid bridge player to the very end, competing in local duplicate tournaments for masters points until the pandemic hit.
“He played bridge until the last day on his computer,” his son, Jim, said. “That’s the way he kept the knife sharp. And he always played to win.”
Used with permission of San Antonio Express-News, from Gorman believed in sharing life’s blessings, by John MacCormack, published on Wednesday, October 14th, 2020; permission conveyed through Copyright Clearance Center, Inc.
October 30, 2020
By John MacCormack, Staff Writer for the San Antonio Express-News